Video game cheating comes in many forms, the most notorious of which involves people who use dirty tricks to make themselves more effective (or invincible) in multiplayer combat games. The solution for people caught engaging in this form of cheating has long been permanent cancellation of the account and a lifetime of shame… at least until he or she gets a new account, that is.

But with the rise of Gamerscore and Achievements on Xbox Live, a new form of cheating has become popular: people who manipulate their save files and account information to artificially boost their Gamerscore by unlocking Achievements they didn’t actually earn. Of course, neither Gamerscore nor Achievement unlocking will help you actually play a game betterâ€”both serve as mere bragging rights… and so they have become something that cheaters have begun to manipulate relentlessly.

Better watch out, says Xbox Live’s Major Nelson, the well-known public face of Microsoft when it comes to all things Xbox. Starting today, Xbox is punishing Gamerscore cheaters with some pretty heavy penalties. If you’ve used a cheat on your account, better check it out to see if you’ve been affected. How will you know?

Well, your Gamerscore will be reset to zero. You won’t be able to regain any Achievement you previously unlocked (legitimately or otherwise), though you will be able to gain new Achievements. And your account will be permanently labeled as a cheater account (see blurry pic above for an example). At least you still get to keep your account. 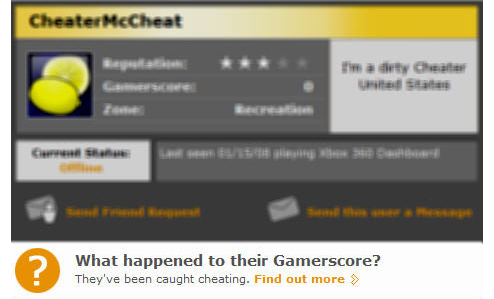 There you have it. It’s like your mom always told you: Cheaters never win, and… well, you know the rest